It's no secret that the general attitude surrounding Overwatch 2 was questionable and mostly negative following its initial announcement. The negative sentiment stemmed from the perception of Overwatch 2 by some fans and critics as essentially a glorified update to the original game, utilizing the same character assets, maps, and gametypes present in the first Overwatch. While many players and personalities participated in the Overwatch 2 beta, the overall consensus was underwhelming.

However, the sentiment has taken a drastic change since Overwatch 2's full launch late last week. While the first day of launch was plagued by DDoS (Distributed Denial of Service) attacks, players finally settled in and started exploring the full game. The general consensus has been extremely positive, with many larger creators praising the change of direction. Popular YouTube creator penguinz0 aka MoistCr1tikal, aka Charlie, aka the Moist Lord, recently uploaded a semi-moist meter review of his initial impressions of Overwatch 2 on Monday. He claims that Overwatch 2 is a "breath of fresh air" compared to the original game, mentioning that he feels the downscaling from 6 players a team to 5 players a team makes DPS more fun and impactful. The removed position was the 2nd tank/off-tank position, putting greater importance on the play of the other positions.

An important thing to mention is that only the PvP portion of Overwatch 2 has launched, with the PvE single player experience slated to launch early 2023. When talking about Overwatch 2 in this piece, we'll just be referring to the portion that is currently launched.

While the game has its flaws and not every promise is yet delivered upon, Overwatch 2 can be considered a massive hit from both an active player base perspective and a content platform performance perspective. Below, we'll take a look at the raw Overwatch 2 data, and we'll also compare the launch of Overwatch 2 on Twitch with other major 2022 releases.

Here we can see the massive numbers Overwatch 2 reached on Twitch during its initial launch week, peaking at just over 600,000 consecutive viewers. This chart shows hourly viewership data, so the peak viewers were a little more than what is visually shown here. Usually new games settle and level out their average viewership after a few days, which we can see is starting to happen in this graph, but settling at 250,000 average viewers is incredibly good.

When we compare Overwatch 2's Twitch data with other larger 2022 releases, we can see to a greater degree to how successful its launch is. We all remember just how popular Elden Ring was on launch, so seeing Overwatch 2 stacked up with the 2022 Game of the Year frontrunner helps give greater context behind its early success. While Overwatch 2's total viewer hours don't quite stack up to Lost Ark's or Elden Ring's (partially because of the DDoS attacks), it's still one of the best performing games on Twitch this year.

Time will tell if Overwatch 2's numbers can maintain their current levels. But regardless, Overwatch 2's launch was a massive success, adding a welcome newcomer to the FPS market.

Happy Thanksgiving week! Let's talk about the November heavy-hitters dominating the Twitch.tv charts. Pokemon Scarlet & Violet dropped Nov 18. 2022 and as of Nov. 21 it is the second highest selling console of all time. However clips of users glitching through the game have gone viral, leading players to

ahh! so scary D: only the bravest Twitch streamers could play these! 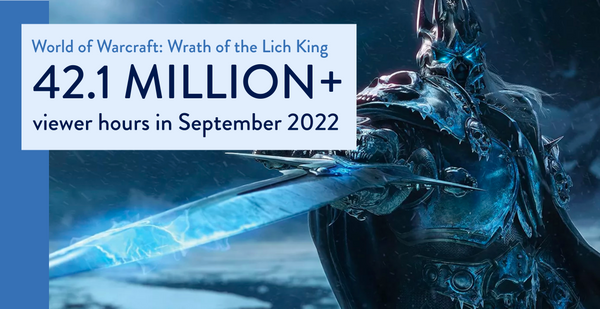 This week, both veterans and new players had the opportunity to experience it again with the re-release of World of Warcraft: Wrath of the Lich King Classic. Wrath Classic’s release absolutely crushed viewership numbers for the rest of September with over 42.1 million viewer hours.